They might not be part of the Big 5, Fat 3 or any other “wildlife collection”, but that doesn’t matter because South Africa’s antelopes don’t need a catch name to be impressive. 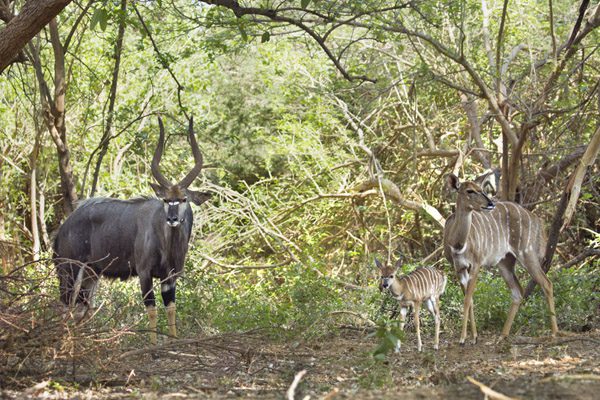 Antelopes of all shapes and sizes are found across the country, from the Gemsbok of the Kgalagadi to Kruger’s impalas and the Bontebok of the Cape. Perhaps this is why they have become so synonymous with South Africa.

Beautiful, graceful and incredibly shy, it has become one of the Estate’s flagship species.  Game drive on Likweti and you are almost guaranteed a sighting. But you’ll have to be quick with your camera as they’ll disappear back into the thickets and seemingly melt into the bush seconds later.

Nyala are one of the most dimorphic antelope species in Africa, meaning the males and females look nothing alike. The big grey males, with their shaggy coats and yellow legs are the only ones to have horns and are much larger than their female counterparts. Females are a reddish-brown with obvious vertical white stripes and are far more delicate.  It is only the iconic horizontal white stripe between their eyes that connects the male and female markings.

Looks are not the only way male and female Nyala differ. They also cross the sizing classes and this is where it gets confusing!

Antelopes are either bulls and cows, or rams and ewes, depending on their size. So a male eland would be referred to as a bull where the female is a cow, while a male impala is a ram and the female is an ewe.

With Nyala, it is not as simple as this. Males weigh in around 100-120kg, making them firmly bulls, but the smaller females only reach 55-65kg meaning they are classified as ewes – confusing? Thankfully not for them!

Natural browsers, early morning or late afternoon is when Nyala are most active. While fruit, berries, leaves and twigs make up the staple of their diet, you will see them occasionally grazing on new shoots of grass after the first rains.

Rutting season is the best time to capture the males in all their splendour as they puff up their coat to ensure they look as big as possible. While this happens all year round, Nyala don’t have a distinct breeding season, Spring and Autumn are the best times to try and capture this.

So while they might not fetch the same prices at auction, have the glory of being SANPark’s figure head or the global attention of our “bokke”. To us at Likweti Nyala are just as iconic, magnificent and as priceless as any other South African antelope.