On a recent visit to Likweti,  Peter sent us a really exciting email and we are very enthralled about his news on his latest sighting :

Whilst making a quick visit earlier this week,  Peter came across  some Greater Striped Swallows flying over the dam next to the entrance gate. This is not only new for our birdlist, but unusual too, as this swallow is normally at higher altitude on the escarpment. Also, it is a migrant that departs in April – having noted a few birds that same morning at KMIA he thought that perhaps they were on passage.

Peter then shot off to Hlatini dam and while slowly driving along the road bordering the dam  noted a large white raptor circling overhead. Thinking it was an African Fish Eagle he quickly jumped out of the car just as the bird was slowly moving in his direction. On training his binoculars on it he noted plain white underparts with black on the tail and black trailing edge to otherwise white wings.

It then headed in a straight line due east towards Kruger and soon disappeared. What Peter found he was looking at, was a Palm-nut Vulture and thought he must be mistaken, as this scarce vulture has a limited population in just two areas of KZN, Mtunzini and Kozi Bay. Vagrants have on rare occasions pitched up in Kruger Park and even Nelspruit on three occasions though.

After double checking later at home and studying every book on raptors he could lay my hands on Peters sighting  was indeed a Palm-nut Vulture and states “…  Likweti is definitely a birder’s paradise” ! 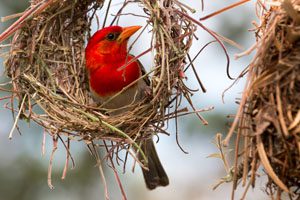