Have you ever heard of the “Ugly Five”?

Home Blog Have you ever heard of the “Ugly Five”?

Have you ever heard of the “Ugly Five”?

No, not the Big Five! The UGLY five!

The members of this exclusive club are the hyena, the wildebeest, the vulture, the marabou stork and the WARTHOG.

We’ll start with the Warthog in our series. 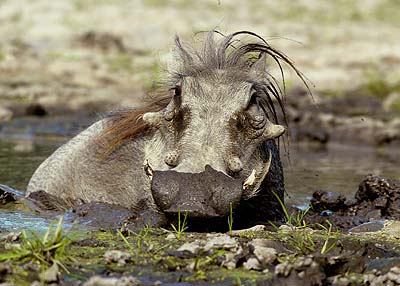 Why ugly? Well the name says it all. Warts all over!  Those funny, wart-like bumps that appear on the sides of the head, below and between the eyes and tusks, and smaller ones near the jaw.

The head is too large for its body. Its face is flat. And the snout is extended. Man, I don’t want to meet one face to face!

Its eyes are set high on the head, to watch for predators, even when it’s grassing.

It also has two sets of tusks. The upper, longer set comes from the sides of the snout and curve towards each other. Used for digging. And the lower tusks, with a sharp edge, at the base of the upper tusks. Used for fighting and self-defence!

Fights between males can be violent and bloody. They use their tusks to fight each other during the mating season. And predators such as lion, leopard, cheetah and wild dogs.

Be careful, should you meet up with a warthog! It will grunt, snort and flatten its ears. Then it will squeal and bolt. Away from you!

Lifespan:  15 years in the wild

Diet: Grass, bulbs, root and tubers. They eat in a kneeling position.

Habitat:  Africa in the moist and arid savannahs

Insect hotels – what’s the buzz all about?

A brand new home is waiting for you!

Experience the Romance of a Farm on an Estate

Being intentional about your lifestyle