The hare and the tortoise at Likweti Estate

Home Blog The hare and the tortoise at Likweti Estate

The hare and the tortoise at Likweti Estate

The Tortoise and the Hare is one of the best known children’s stories of all time. A classic tale about a tortoise who beats a hare with sheer will power. At Likweti Bushveld Farm Estate, we have our very own characters playing their own version of this well known fable. The Spek’s Hingeback tortoise (Leopard tortoise) and the Scrub hare, who will be the first to cross the finish line this time?

The Leopard tortoise is the largest species of tortoise in South Africa and can live up to 100 years. Depending on the region they stay in, these tortoises can weigh between 13 and 40 kilograms. Females are usually larger than males whilst males have longer tails. They have a distinct yellow carapace with black spots. As they get older, the shell usually darkens.

Leopard tortoises can climb and swim. Thanks to their large shell they have rather big lungs that allow for buoyancy. They also have very good eyesight. These tortoises can travel between 25 and 50 kilometers when relocated from their homes. Their diets consist mostly of plants since they lack teeth. The tortoises shear through grass, fruits and succulents whilst they tend to gnaw on bones. They locate food with their sense of smell.

During mating season, the females can lay up to 24 eggs in a hole in the ground. Incubation can take 8 to 15 months where after hatch-lings dig themselves out of the nest.

Leopard tortoises are crucial to the environment since they act as seed dispersers. When consuming plants and seeds, these materials are passed undamaged through their faeces. These usually end up under bushes and pretty soon, one may see a new plant growing.

The Scrub hare on the other hand is a worthy contender. They differ from rabbits in that they do not rely on a burrow for safety in case of danger. Instead, they have big ears to detect danger and very strong legs that allow them to make a run for it. They tend to stick to woodlands where cover is abundant.

One can recognise the Scrub hare by its distinct coloration. Behind its ears, you may notice a patch of red-brown fur whilst their perched ears are grey. They can grow up to 65 cm’s in length and weigh between 1.5 – 4.5 kg’s. Even though they are not an endangered species, the population has been declining by 20% every year since 2014.

Regardless, the hare plays an important role in the ecosystem since they help redistribute soil. Since they are nocturnal and forage at night, they make an indent in the ground where they stay during the day. Thanks to the colour of their fur, they blend in with the environment and are not so easily detected by predators. The Scrub hare is a herbivore and therefore eats grasses.

On average, Scrub hares can survive in the wild for five years. Next time you are driving home at night watch out for the cunning Scrub hare as they tend to zigzag when running in front of a car. Scientists assume that the zigzagging run is an effort to avoid predators but it may also be that they are running from the shadows cast by the vehicle’s lights.

Some might say that that the hare is running to get to the finish line in a frantic effort to beat the tortoise. We’ll let you decide… 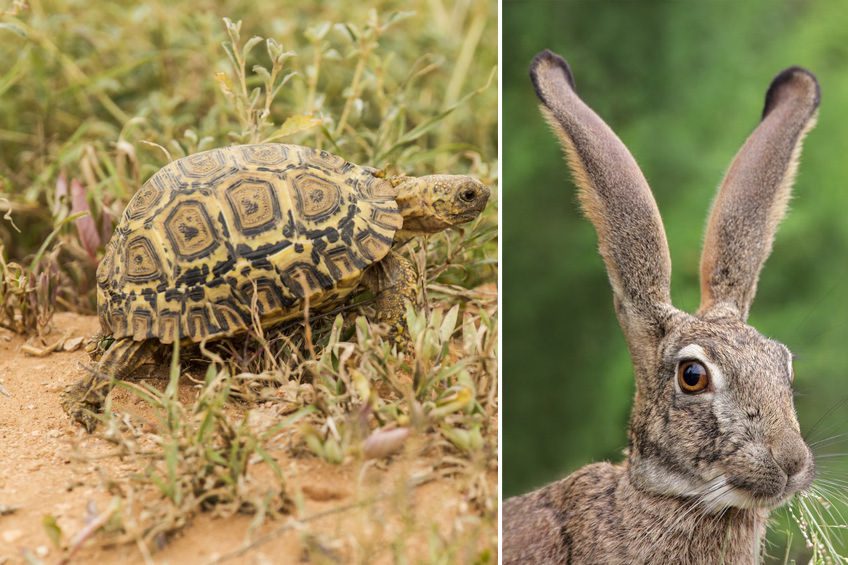