Home Blog Look out for the Flap-necked Chameleon

While out and about at Likweti Estate, whether you’re walking or running, be on the lookout for the Flap-Necked Chameleon. Spotted every now and then, a sighting of this colourful critter is enough to make your outing extra special and will undoubtedly be the highlight of your day!

The Flap-necked chameleon (Chamaeleo dilepis) is known for its occipital skin flap that is located behind its head. The skin flap assists with camouflage. The size of their flaps may differ depending on their age and sex. The chameleon’s tail is the same length as its body and is used for balancing whilst climbing a tree. You may also notice the chameleon has small white scales on its throat and a white belly.

Like any other chameleon, the Flap-necked chameleon can change colour to blend into its environment. Did you know that if a chameleon is stressed, they will change to a dark colour? They also have the typical chameleon eyes that are independent of each other.

The Flap-Necked chameleon is one of the largest chameleons found in South Africa and can grow up to 35 cm’s in length. They are commonly found in Mpumalanga, Kwa-Zulu Natal, the Northern Cape, Northern Namibia and Northern and Eastern Botswana.

Whilst the Flap-Necked chameleon is not an endangered species, the greatest threat to its existence is road kills. Other threats include being prey to monkeys, snakes and large birds.

Chameleons mainly eat small insects like grasshoppers, flies, beetles and crickets. They catch their food by focusing both eyes forward to create binocular like vision before extending their tongues with a sticky end to catch the insect. A chameleon’s tongue is the same length as its body.

When mating, the female chameleon carries 25 – 50 small eggs. Egg development can take 3 – 4 months. She will lay her eggs in a hole with damp soil during the summer months. It can take up to 377 days for the eggs to hatch after which time the young chameleons will dig themselves out of the nest.

How does one distinguish between a male and female Flap-necked chameleon? A male has a discrete swelling at the base of its tail as well as a spur on its hind foot.

Interestingly, chameleons move slowly so they can mimic the movement of leaves in a tree blowing in the wind. This helps them to blend into their immediate environment.

At Likweti Bushveld Farm Estate, we feel really lucky when we stumble across one of these fascinating reptiles. 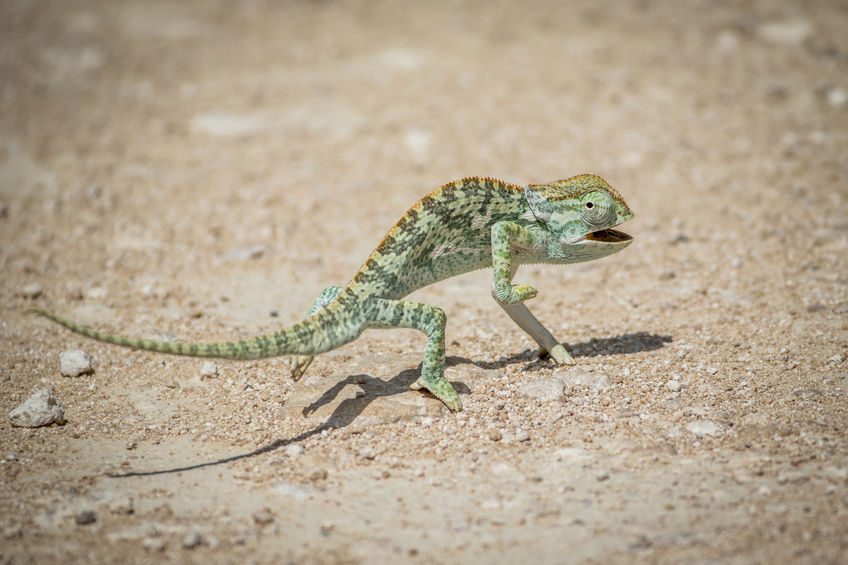