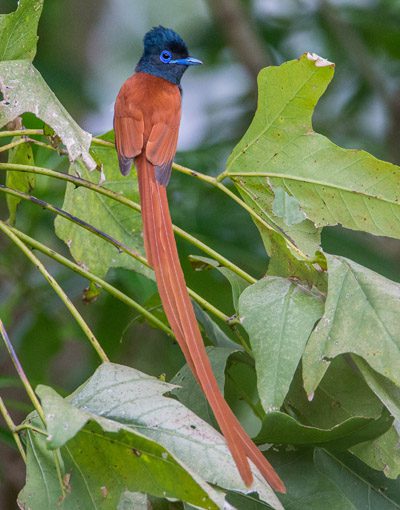 The African paradise-flycatcher couple, which is commonly found at Likweti Bushveld Farm Estate, is truly a magnificent example of a modern relationship where both partners share tasks and responsibilities.

The female flycatcher even lends a beak when it comes to nest construction and the two make sure to keep communication flowing as they chatter continuously while working. But as soon as the nest is done they quiet down in anticipation of the arrival of the new family members.

When it comes to beauty and charm the paradise-flycatchers opted for couple’s colour coding and unlike most other bird species the female is comparably beautiful. The male does however still distinguish himself by wearing a much longer tail than his female partner.

The male also eagerly pulls his weight when it comes to raising the young and takes turns with the female too with incubation duty and feeding once the chicks have hatched.

African paradise-flycatchers are often found close to houses and in gardens where they may return every year to nest in the same tree and even the same branch. Unfortunately though, they are very prone to poisoning by the use of insecticides so be careful if you have some in your garden as they are really handy in controlling insect numbers.

A Water Revolution | 3 ways to save water at home

What every new birder needs to know