What’s blue when shut, but orange when opened, and scuttles all over Likweti?

Home Blog What’s blue when shut, but orange when opened, and scuttles all over Likweti?

What’s blue when shut, but orange when opened, and scuttles all over Likweti?

With the warm spring time sun, comes a flash of colour and an interesting mating dance in many suburban gardens. The bloukop koggelmander or blue-headed lizard (Acanthocercus atricollis), otherwise known as the Southern Tree Agamas are perhaps the most distinctive of all South Africa’s lizard species. Brilliantly blue during the mating season, the male who has won the territorial battles of spring will earn the right to bob his head in the traditional mating ritual with the females in his territory. 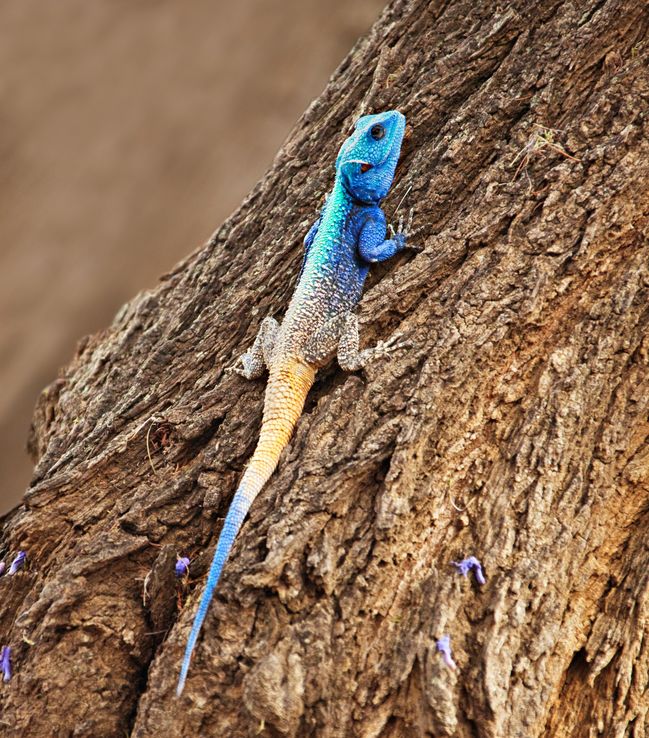 Suburban settlers
Originally forest dwellers, blue-headed lizards adapted to the bushveld savannah ecosystem, enabling their spread across Southern Africa. It’s their capacity to adapt that has seen them become garden favourites, the perfect city slicker, as long as your garden has a tree it can be home to a blue-headed lizard. What’s more, contrary to popular belief, while the bite of a blue-headed lizard is rather painful it is far from venomous.

They are however the perfect prey for domestic dogs and cats, as well as a host of raptors, snakes and small mammals. Making our suburban gardens potentially more dangerous than the forests and bushveld homes their ancestors inhabited.

Ambush foragers
Beetles, moths, grasshoppers and ants beware, as these lizards are the perfect ambush predators. Whether it is from a stationary stance, high up in the trees, or a ground assault blue-headed lizards are a formidable foe with a number of special adaptations that ensure they almost always capture their prey.

What makes them unusual is their love for ants, a species that most other insectivores find unpalatable thanks to them being highly acidic, something that doesn’t seem to bother our blue-headed friends.

More specifically our over use of pesticides that reduces prey availability and in some cases can directly poison these beautiful beasts or indirectly kills them as a result of bio-accumulation as it goes up the food chain.

They are also a victim of fashion, seen as a designer pet hundreds are plucked from the wild to be caged in glass tanks. This makes for a sad end for such a beautiful creature as few survive in captivity.

Five fun facts
1. Megawatt mouths – if they weren’t colourful enough, these awesome lizards turn up the brightness factor when they open their distinctive orange mouths.
2. Sticky tips – they secrete mucus from the top of their tongues to make them super sticky and perfect for catching ants and other creepy crawlies.
3. Scales and spines – look past their vivid colours and you will notice that their skin is anything but uniform. The scales along their spine are larger and have small spikes, giving them their raised appearance.
4. Queens of camouflage – females don’t have the vivid blue colouration of the males, instead their brown bodies provide perfect camouflage against their tree trunk homes.
5. Leaping for lunch – they can be aerial acrobats when it comes to catching their dinner, launching themselves into the air in pursuit of moths, flies and beetles.