A beautiful African Pygmy-Kingfisher recently visited Likweti Lodge when he accidentally flew into a window. 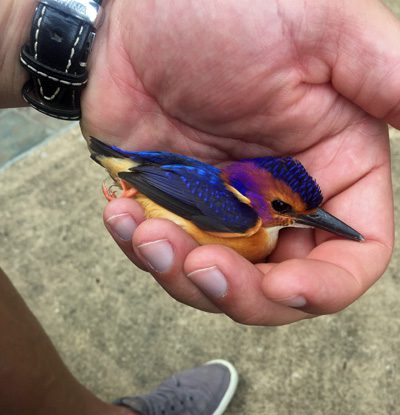 Jaco Hattingh of Likweti Lodge was lucky enough to spot the little bird in need and was able to rescue him from his dizzy flight. Just a few minutes later, the small Kingfisher flew off like nothing ever happened, he said. He was in good shape.

Local bird expert, Peter Lawson who visits Likweti Estate on a regular basis says that the African Pygmy-Kingfisher is a migrant from further north in Africa. It has only been recorded once previously at Likweti Estate.  They are the smallest of Kingfisher species and this particular bird was fully grown. He also said that unfortunately windows are often a serious problem for them. They fly low and very fast and see reflections of vegetation in windows and thus assume they can fly through. This time, the African Pygmy-Kingfisher was lucky to come away unscathed.

What a rare moment to be able to view this stunning bird so closely!

Thank you for sharing!

5 Things to do during load shedding

Be Warm Inside and Out at Likweti Estate

Idyllic home for sale in the heart of the Lowveld